You know about all this, don't you, mom?

"I never say this to anyone ... but I am afraid of the dark, mom! I don't express it, but I care a lot about you mom ... you know about all this, don't you, mom?" from the movie Taare Zameen Par touched my friend so much that he cries when he hears this song. And I am not talking about a "kuchi bhai" scary friend, this is a grown friend who is a terror at his workplace and dares to speak to even the President of the United States if he needs to ... and that's not an overrated description, that's him! 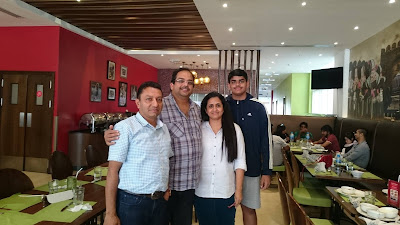 When he narrated the gist of the movie and how some of its sentiments connect to his journey in a boarding school since 42 months old, that hit my soft spot. I couldn't resist watching the movie and by the time it reached this song, I could feel the emotions of the boy as I watched his act. The movie's slow progress into the boy's saga at the boarding school felt so real.

Getting sent to a boarding school at three and half year's old is not easy to digest. That is a "baby" just beginning to understand the world and getting ready with excitement to explore the possibilities ... with an eager mind seeing the colours and grasping the sounds of the earth within an infant heart trying to make sense of the sights, smell and sensations. That baby has not felt the boundless freedom of a child yet.

As he got ready to kick the ball, chase the cat and run with the dog, he is enrolled in a high calibre institution with a well-planned schedule of inducing academic content into human beings to shape the top brains of the country, called "boarding school". Before he tasted the opportunity to connect with the world and understand the emotions around him, he is in an envelope with strangers trying to make sense of each other's social abilities.

While I write this blog I can feel several dots of deep emotions that he must have gone through when his mom and dad left him there for the first time. A sudden gush of "I am here all by myself" as the song goes "Don't leave me alone in the crowds ... I won't be able to return home. Don't send me far away that you won't even remember me, mom". True to the words of the song, his boarding school was several hours away from his playground, far away in Kottayam (Kerala, India).

"Mom, you wanted the best for me, but all I wanted was to be with you when I was an eager child with an attention span of a puppy. You sent me on a journey of many miles that took me through the best schools and universities ... and it moulded me in the design that you chose just to deflect me many more miles away from home in search of a career ... I won the game as you planned for me, and I saw the world from a high altitude ... but now, after many miles and several thousand days since Kottayam, I yearn to be with you and hear your voice in person. I hope you would remember me when I get back in your arms"

Fortunate for me, I left home only at 20 ... and that image of the day when I left home is still fresh in my mind. As I left on my dad's Honda C-70 motorcycle with one luggage bag and my backpack, mom was holding her emotions and waving at me. My sister and brother were just staring with no way of defining their feelings. We were one family with a full quorum at our daily dinner for many many years ... and we have clocked several thousand hours of conversations at the verandah. For the first time I was going to be "alone", and it took me a few months to come to terms with it. In contrast, my friend faced this complex emotional twine at an age when he could not explain it.

On the lighter side, as the days went by, I became acquainted with university life and started enjoying the high-speed train to freedom! It was like having my own world where I could design my days and my future the way I wanted. The emotions became easier to manage and the routine holiday travel back home became fun ... until I met my valentine ... and now the tide has turned, it was difficult to leave university during holidays as that meant being away from her!