Kite Beach, Dubai was filled with people enjoying the cool weather while cycling, running, swimming or otherwise, having breakfast while feeling the breeze on our hair. Rahul picked me up from Novotel WTC and we got to Laola which was rated as the "best each facing cafe" by him, but that day's "low-speed service with expensive coffee in cheap paper cups" did not go well with his (and my) reviews of the place! They can do better. 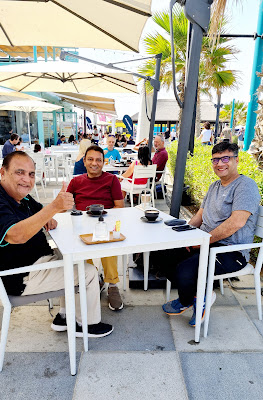 Vijay Hariyani was prudent. He said, "enjoy the scenery and good weather ... small glitch with the service is fine". His engaging conversation of the day took me through a whirlwind of history and I "walked with him on the salt fiends and yesteryears" as I became absorbed in the way he narrated the little stories that connected to each other. It was like small dots that connect to make a big picture ... and I forgot about the annoyance I had when I got my coffee in the paper cups ... Rahul and I ordered another coffee 😊

Vijay's walks on the salt fields from 1985 to 2010 have deep experience and excellent stories right from the point of action. I did not get absorbed by chance, the depth of the story is like watching an Amitabh Bachchan movie with twists that make you want to know more ...  though Rahul may have had a hard time hiding his yawns after having seen the "movie" several times 😉

It turns out that the Maharaja of Kutch, in ancient times, had a close relationship with the palace of Yemen. His frequent trips to Aden and friendship with a businessman from Mumbai gave birth to the idea of setting up salt harvesting in Kutch. His Cowasji Dinshaw* (a Parisi businessman with vast business interests including a large salt field in Aden) encouraged and supported the Maharaja's efforts to set up the first salt field under the name "United Salt Works" in Kandla on the Maharaja's own plot of land. After the independence of India, this land was taken over by the government as part of the nationalisation policy where the royal house had to hand over its powers to the democratic government.

*Cowasji was so well connected in Aden that he was called Adenwala in Mumbai.

The salt fields were run as a business with a Parsi gentleman (let's call him Farzan for the sake of this story) from Bombay, assuming that royalty must have been paid to the Maharaja. The salt fields did well and flourished, but over time yield dwindled and it went into deep financial trouble. While the fields were in trouble waters, workers were unpaid, machinery was left idle and probably a host of vendors had unpaid dues too.

Vijay's connection to this field came when he was invited by Farzan to assist in rescuing the situation by finding a way to generate cash and revamp the operations. Considering the depth of the problem, Vijay who was on his way to retirement, took this assignment as a problem-solving challenge rather than one where business can be restored.

On the sidelines, as Vijay sat with Farzan to review the "action plan", one vendor appeared and was agitatedly asking for his dues ... "You have not paid me Rs34,000 the last 9 years!! I have gone to your office in Kandla and they keep pushing me around. Will you pay or not??" ... and Farzan was not new to this kind of aggression, so he kept his calm and ... "No problem Saab, sit down, don't get angry ... now you came to me let me check. I promise you I will check and confirm right now" ... followed by a shout to his accountant ... "Baiju, bring the ledger and check if we owe this gentleman his payment"

Meanwhile, Farzan continued his chat and ... "Saab, you came a long way, you want tea? Have some tea ... boy, order one chai for this gentleman"

Baiju went on his search for the "historical records in the Museum of Farzan" and came back with a crumpled, discoloured but legible, loosely bound thick ledger and pointed to the handwritten record with multiple corrections and said, "Yes sar, we owe him Rs34,000"

Farzan was a fair man, he immediately accepted that he owes the dues to the vendor and told him ... "Now, I know I actually owe you. So, don't worry, I will pay you" ... and the vendor being cool by now, but slightly annoyed ... "I need to know when you will pay me" ... and Farzan, "You see Saab, I have a long list to manage and I don't have any money now. I am arranging. And I will pay you, but I cannot commit a date to you now"

The Saab hit the roof and started his retort ... "You have to tell me a date. If not I am going to take you to Court. I will make sure I sue you ... blah, blah, blah ... (maybe) with intermittent use of the words that mean idiot, cheat, bluf, dishonest"

Farzan's eyes broadened and focussed on Saab like inspecting a rough pearl from the ocean and he called out to his trusted accountant ... "Baijuuuu, cancel the tea! Write Saab's name in the list of legal suits. Bring me the list"

Now he shows Saab the list of 48 names, and says "Tikey (means OK) Saab! I will write your name here. You are number 49 suing me in Court. Go to Court and take action. I will manage it. Thank you Saab, go ahead" ... and with a wry smile, he tells Vijay, "I like people going to Court. That way they don't disturb me anymore!"

With that Vijay embarked on a semi-retired mission of trying to find a solution for Salt Field No. 1 of the Maharaja of Kutch that was established in 1920 and has been dormant for the last 15 years.

As he met with the local community and spoke to the leader he realised that the "weight of the whey is much more than meets the eye". The people have been living in the company houses for the last many years while the unpaid wages were mounting. They are irked and exasperated with the situation that they were left with when the field stopped operations. As Vijay struck a conversation with the elders, he realised that the problem is more than just numbers. His demeanour must have been so charming (like Amitabh Bachchan!) that the people took him to their houses, showed him around and went at length to share their side of the story. 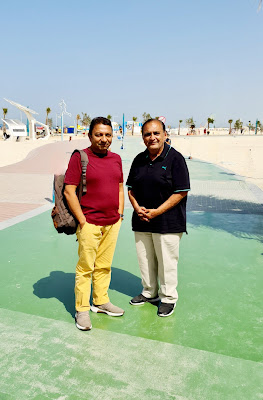 Along the way, as he felt more connected to the crowd, he asked for water ... and they served him a good cup of tea (not the type that we got in paper cups that morning!). It became quite apparent that they are not going to allow any items to be moved out of that place unless they are paid. The company has junk machinery (old abandoned machines that have become junk by this time) and various scrap materials that can be cashed.

Several visits over the next 3 months, more tea and some talks with the elders yielded some results. The community agreed to allow the scrap to be removed and sold, provided they are settled with the revenue made from the sale. That seemed like a good deal to strike with the people to loosen the knot and move the company agenda. With that the elders helped fix the buyers, scrap was removed, sold and the community was paid some compensation.

And I never realised that ... 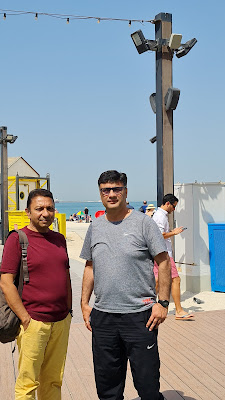 Now, going back to Jakko where Vijay hired the contractor the herd of donkeys to transport gypsum ... after the stint of recovering Gypsum, Vijay was engaged by another businessman and friend, Mr Naidu from Chennai to survey the land around Jakko.

With the help of the local master Mr Hussensha, the area was surveyed on jeep and to the amazement of Naidu, there was a vast land that can be identified for salt harvesting.

In the later developments, Naidu managed to secure 4,000 acres on one side and another 6,000 acres on the other side of the Jakko salt field that was managed by Vijay previously.

In their expansion of the business, Anantham, the boss of Mr Naidu further expanded to another 60,000 acres that were leased based on the ancient British format salt field lease agreement!

... I need to sit with Vijay again to untie some of the knots in this blog. More updates to come.